Moving to the Gateway 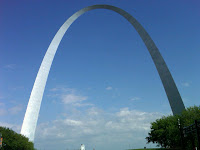 I have been slowly spreading the word that I will be moving from Tampa to St. Louis mid-July to start an exciting new job with Hager Companies. I am lucky enough to have been offered a job that merges my knowledge of the door and hardware industry with my passion for social media.

I have been selling Hager products for the entire 20 years I have been in the industry. It started with hinges and as Hager branched out to locks and closers, I did too. I found that both the locks and closers were great products, at a reasonable cost and with lifetime warranties.  That beat any other product that I could offer. My customers have been satisfied with Hager products.  And by satisfied I mean I never have any complaints about the products! I feel I have grabbed the brass ring to have this opportunity to be a part of the Hager Team!

As excited as I am about my new opportunity I am sad to leave my home for the last 17 years and most especially the friends that I have made here. I have been blessed to have lived in an amazing neighborhood called Seminole Heights and have never experienced anything like it. People care in this community. People share in this community. I will miss the many yappy hours, yoga parties and game days. I will miss the sore muscles that come with constant belly laughs when we gather together. I will miss my new Relay For Life crew members that I have had the joy of working with over the past 9 months.

I know the friendships will survive the new distance and we will become familiar with Skype and Facetime.  I also know I will be back to visit though I am sad the dogs probably won’t see their girls, Trixie and Carsen, again.

In the meantime I am working on downsizing my belongings. That alone might be an entire blog post!  The house currently has a contract on it. Again, amazingly blessed that neighbors were ready to upsize with their growing family and thought my house, with its big backyard, would be perfect.

The only less than bright spot has been trying to find housing in St. Louis.  I think I have it settled now.  If this is “the place” I can’t wait to share it with you!  Waiting for a lease to be emailed to me so I can sign and send a deposit!

Posted by Ginny Powell at 10:37 AM No comments:


I attended one of my favorite customer’s 75th anniversary party last week. While mingling I met an architect and the conversation drifted to hardware.  As always when I meet an architect the question I ask is what frustrates you most about hardware?

In this case the answer was the different grades of locksets. The architect went on to explain that he primarily uses mortise locksets but he knows they are the "top of the line" and sometimes his clients prefer something less so.
As I was explaining the different grades and how he might be able to value engineer I thought this information might make a good blog post.  Aren’t bloggers always thinking that!

Strength, performance, and construction are all included in defining the three grades of locks.

Grade 1 is the highest performing rating. A Grade 1 lock must be capable of performing through 800,000 latches and unlatches without failure. It must withstand 700 lbs of force per inch for lever locks.

Grade 2 is a medium grade and capable of operating through 400,000 cycles while withstanding 450 lbs of force per inch for lever locks.

Grade 3 is the lowest grade. It must operate for a minimum of 200,000 cycles and withstand 225 lbs of force per inch for lever locks.

In my opinion how to choose what Grade of lock is appropriate is less about the building and more about each individual door opening. After reviewing specifications for 19 years I know Grade 1 is the most popular choice.  These locks should be used on exterior openings that don’t require an exit device and any interior opening that gets heavy traffic but there are other less used openings in a building that a Grade 2 lock may be used and in turn save the owner money. I haven’t yet used a Grade 3 lock in a commercial application.

A couple of examples:

In another scenario a Grade 1 lock at the entry doors into a tenant space in an office building is a smart choice for security. The offices, bathrooms and storage rooms, depending upon the tenant employee/visitor numbers, a Grade 2 would be a good choice.

Manufacturers typically offer the same lever & rose styles for both Grade 1 and 2 locksets so all the locksets will be uniformed even when mixing different Grades.

There is a lot more information available but hopefully this provides a basic outline for you.

Thanks!
Posted by Ginny Powell at 11:55 AM No comments:

Driving into work today I was stopped at a red light at a small but busy intersection.  It was still dark.  I noticed on the opposite street a car with their hazards on and thought what a crummy way to start  week.  Then I realized there was a older woman sitting in the car.  I was trying to figure out how I could help her but I was on the opposite side and couldn't push the car out of the way, which is what she really needed.

As all this was going through my head a very nice big car whipped around into the parking lot that was nearest this woman's car.  Two men got out of the vehicle. The driver was a large powerful looking guy, dressed in business attire and the other person looked to be his son.  They chatted with the woman and then proceeded to push her car out of the intersection and into the parking lot where she would be safer and out of traffic.

My light had turned green at that point so I drove on but with a smile.  It was nice to see caring people and wonderful to see a father or mentor teaching a young person the joy of being nice.

Posted by Ginny Powell at 7:51 AM No comments:

How is everyone doing today?

Is it only me who has never been a part of a fundraiser before?  You think you have enough time to plan, organize, fundraise and wham all the sudden you don't!

Team Fifty Shades of Hope has raised $1,255.00 to date which is outstanding!  Thanks to all those who have donated and our team members for reaching out!

We still want to meet our goal of $2500.00 so to that end I wanted to share a few different fundraisers we have going on and also other ways folks can participate both from afar and near.

If you have been to a Relay event you are probably aware of the Luminaria Ceremony.  I haven't as yet but have heard it is amazingly powerful. Luminaria's are dedicate to loved ones who lost their fight to cancer and those currently fighting.  They can be personalized even if you choose to support this event online.  Go to LUMINARIA if you would like to dedicate one for an important someone in your life. 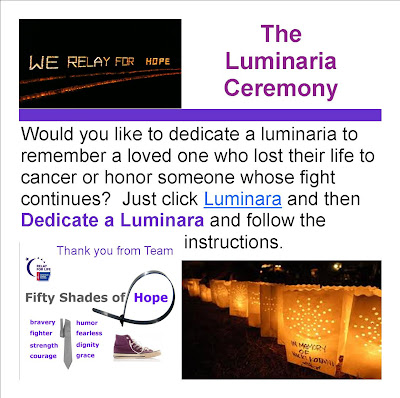 This time of year is Strawberry Season in Florida. Team member Monica Keasey has generously offer to make her delicious Strawberry Jam as a fundraiser for our Team. 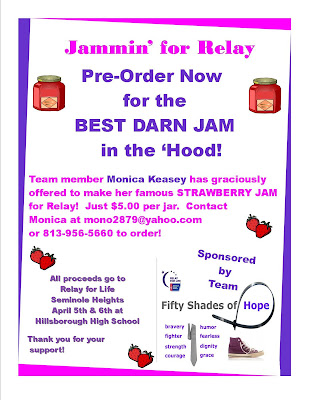 Health Mutt in Seminole Heights has generously offer the use of their two dog wash stations for a fundraiser.  Team members will be there this Friday, March 15 from 5-7 pm to wash and dry your dog for you.  Health Mutt is providing doggie treats and offering a raffle for a big basket of goodies.  After getting clean your dog will sport a purple bandana showing their support for Relay! 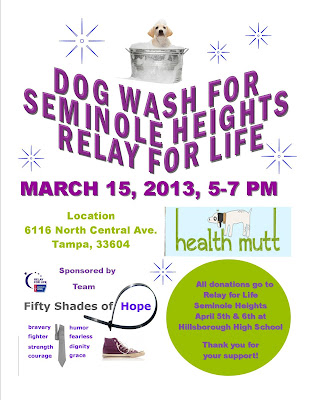 Relay is being held April 5th from 6 pm and ending April 6th a noon at Hillsborough High School.   If you live in the Tampa area please come cheer us on.  Right now we have 39 Teams that will be there.  Each team will have a "campsite" and will be fundraising at the event.  There will be music, food, beverages and tons of fun!  Friday evening after the Opening Ceremony survivors take to the track to walk a lap to honor and celebrate their grit and determination to fight this terrible disease.  The next lap is by all caregivers who support and stand by those fighting.  At 9:00 pm is the Luminaria Ceremony.  During these 18 hours each team will have a member on the track walking/running.

We need volunteers both during the two day event and Team Fifty needs some more team members!  We currently only have 7 and even though one of them is a marathoner that is a lot of hours to cover!

Today's guest post comes from Kathi Frelk, Marketing, with Anderson Lock in response to my post on Powerful.


Powerful people open doors. Not just entrance doors and office doors. And I don’t mean open with a strong arm, a key or locksmith tools. What I mean is, powerful people take the lead in life. In a business, or in an organization, or simply in a situation, they make connections and decisions, and persuade other folks to follow them. Powerful people take command, and perform well.

Lists of powerful people are ever-changing. But the people on the list at any given time have qualities in common that are easy to discern, difficult to emulate. They are influential, capable, and often, dynamic personalities.

Ginny’s recent blog, ‘Powerful,’ Friday, February 8, 2013, highlights Beyonce’s performance before a worldwide audience during Super Bowl 2013. When Beyonce strode on stage, she captured the attention of millions of people. Her dramatic costume, singing and dancing, communicated that she had control of the moment. There were several other singers and dancers on the stage with her, but most of the time, most of the eyes were on Beyonce. She dominated the performance. Personally, I didn’t care for her costume, singing or dancing…but I didn’t change the channel, either! To me, that says she is a powerful woman. She is physically strong, and has power of celebrity.

Physical strength is one of the qualities often associated with powerful people, but it is not essential. Mahatma Gandhi comes to mind when I think of a powerful leader who did not rely on physical strength to communicate his ideals of non-violent civil disobedience. He led India to independence, and opened doors for others across the world to embrace their civil rights in a peaceful, non-violent, manner. His strength was in his beliefs, and in his convictions. His power came from practicing his principles in every situation, over many years. He said, “My life is my message.”


The women on Forbes magazine recent list of Powerful Women are chosen based on visibility and economic impact. Biographies of these women are fascinating. Hilary Clinton, Angela Merkel, (the Chancellor of Germany,) and Dilma Rousseff, (the President of Brazil,) are from the political arena, which both attracts, and requires prepared, powerful people. Whether they seek recognition and power, or gain it gradually through authoritative leadership, they push through barriers, open doors, and aren’t afraid to be the first one to step across the threshold… whatever that threshold might be.

Beyonce, Gandhi and Hilary Clinton on the same list?

Yes. All are, or were, influential, capable and dynamic. But powerful people need not have global reputations. I chose these three examples because they would be familiar to anyone reading this blog. Yet in every “sphere of influence,” every business, every organization, there are powerful people. They are proficient, responsible and talented, with the ability to not only open doors, but to inspire others to follow them. Or, at least, to not change the channel when they are on stage!

Thanks Kathi for sharing your words with A Cracked Door!

Posted by Ginny Powell at 7:30 AM No comments: