My First Fall and Winter in St. Louis

I lived in New Hampshire for nine years in my late 20's and early 30's so I really didn't think a St. Louis winter would be that big of a challenge for me. I knew I would need a new wardrobe since I had been in Florida the past 17 years but I would get into the groove again. I had no idea the country, including St. Louis, would be hit with the worst winter in decades.

It was wonderful to see a Fall season again. The leaves on the trees were beautiful! The temperatures were cooling and very refreshing. I had a small deck off the kitchen and sat outside with a glass of wine many of evenings. The best part about Fall - my best friend came to visit me! It was wonderful to have someone to check out a few of the sites of St. Louis with. I did notice something odd after my BFF left and I was putting the "guest" room back into the "office/junk/extra closest" room again. There were some small leaves inside one of the two front windows. I took a photo and texted it to the landlord.

As temps fell I noticed a definite temperature difference in the front room of the apartment compared to the rest of the place. I finally started closing the doors and stuffed some towels around the windows. The dogs weren't happy as this was a row house so that was the only room they could check out the world going by. We were walking every evening but it wasn't the same of course.

The landlords hadn't been working on the downstairs apartment and the cold was starting to creep up the many cracks between the two floors. The very cool old industrial refrigerator also stopped working for about 36 hours. Just long enough for me to lose all the perishables. The landlord responded quickly for a weekend but it just wasn't quick enough.

Winter. What can I say that everyone else in the country didn't experience? A week of below 0 temps. -11 was the coldest. A few small snow squalls which were fun. Then the big snow storm which brought St. Louis to a standstill for over a week.

I bought the dogs snow jackets. Fergus loved the cold temperatures and snow. Duncan hated it and shivered a lot. 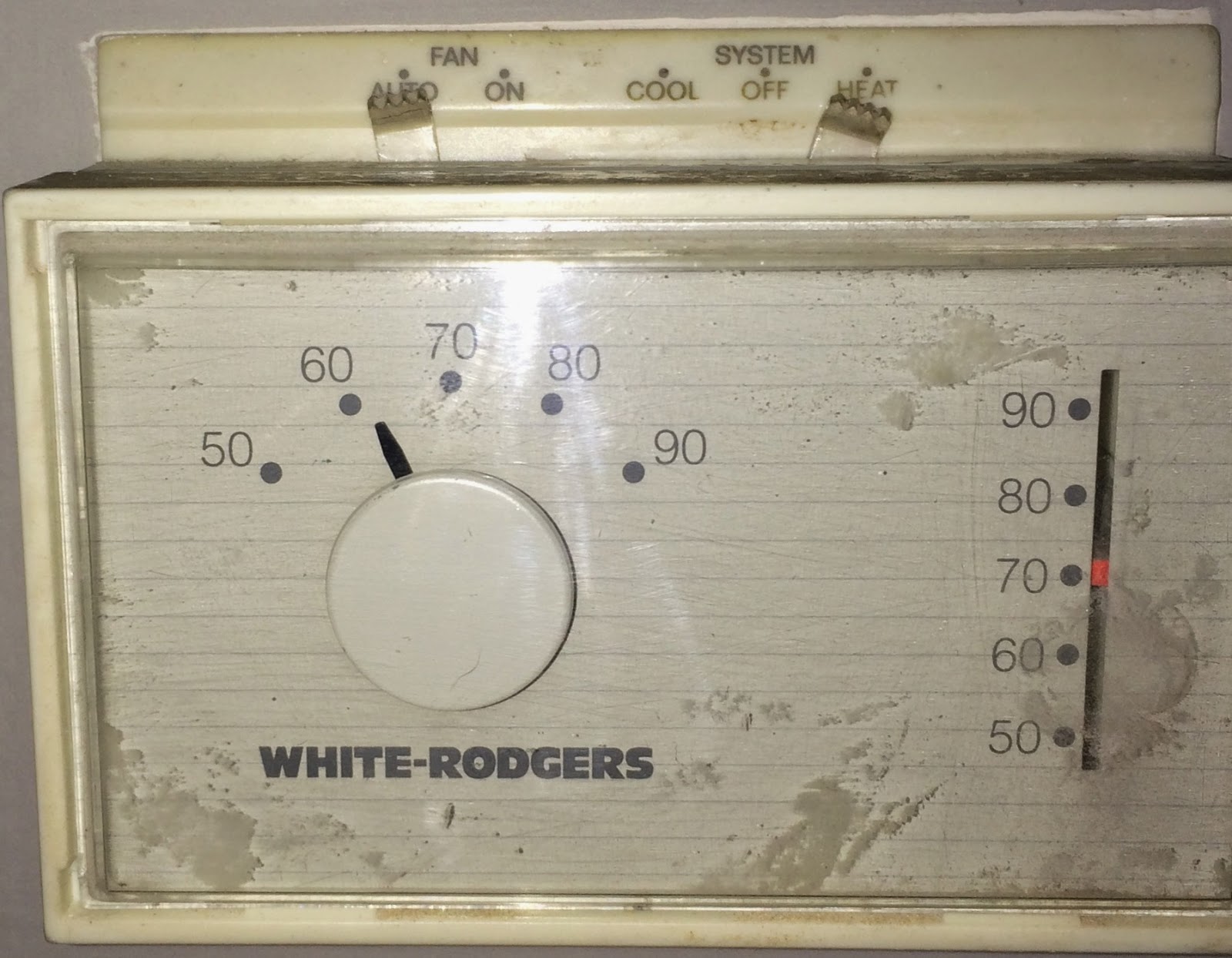 A lot of the problem was the apartment wasn't holding in the heat. I couldn't keep it warmer than 65 and my electric bill was outrageous.

Apparently in December the landlords had removed the old storm windows in order to have a company measure for new ones. They were going to be installed any day now. I heard that for months while dealing with over $400.00 electric bills.

The big snow storm at the beginning of January started early Sunday morning and lasted until Monday. Thirteen inches in 24 hours. In New Hampshire this would have been a minor issue. It shut St. Louis down. The weather forecasters prepared us. I was out Saturday morning grocery shopping at 7:30 am. I learned you can't buy adult beverages before 9:00 am so I was back out around noon to stock up on wine. I made sure all my laundry was done (down, out, around, and down again). I took the dogs for a long walk. I shook out HEAT around my car and down the front steps. I was prepared. Then Sunday I fell ill with a bad cold. It wasn't like I could go anywhere anyway.

Work was canceled for Monday. Which was helpful. I waited until noon for someone to show up to shovel. Snow shoveling was supposed to be included with the rent. It was the warmest it was going to be at -11 and the sun was actually out. Thankfully I never lost power. The newscasters were very clear about how long it was safe to be outside. It wasn't long. As poorly as I felt I knew this was the best time to try and start shoveling since I hadn't seen anyone else at the apartment. I dressed as warmly as I could but didn't have long underwear or snow pants...jeans it was.  I shoveled the back porch and a path for the dogs first. Took a break. Then started on the front. I got the front steps done and was working on the sidewalk when the neighbor and his kids came out and started working on their front walkway. With the sidewalk done I surveyed the car. St. Louis doesn't plow side streets (didn't know that!). Where do you put the snow covering the car and surrounding area when the streets aren't getting plowed? I decided I was too cold and coughing up a storm to think so I went inside to get warm and drink some hot tea. 30 minutes later, semi refreshed, I looked out the window and my neighbors kids had cleaned off my car and a path to get to it. How incredibly kind was that!

During one of my trips to Home Depot in late Fall I had bought a snow shovel and a collapsible snow shovel for my car. Best winter purchase I made besides my coat from LL Bean. For the next 4 days every drive to and from work I got stuck (sometimes twice) and had to use that shovel. I wore jeans and my LL Bean duck boots to work, not professional looking at all. Everyone else was dressing the same way thankfully. Finally, the City declared it would plow the side streets due to the number of complaints it was getting, especially from the social media front. It also helped the temperature was starting to climb and actually got above freezing by the following weekend. My boss texted me "it isn't normally this bad". I was ready to head back to Tampa!

You remember that window in the apartment that I found leaves on the inside? There was snow on the inside during that storm and a few more. I kept being told the storm windows are 3 weeks out. To the landlords credit, after I complained so much, they installed plastic on the inside over the Thanksgiving weekend.  I also discovered during the long winter months that there was a huge discrepancy between temps inside when you walked through the front door, up the stairs and into the my living space. I could see my breathe on the staircase. One of the dogs vomited inside by the front door and it froze. I hung flannel sheets on tension rods halfway up the stairs to try and help. Duncan was wearing sweaters daily and still shivering. Per the landlords this was "normal". 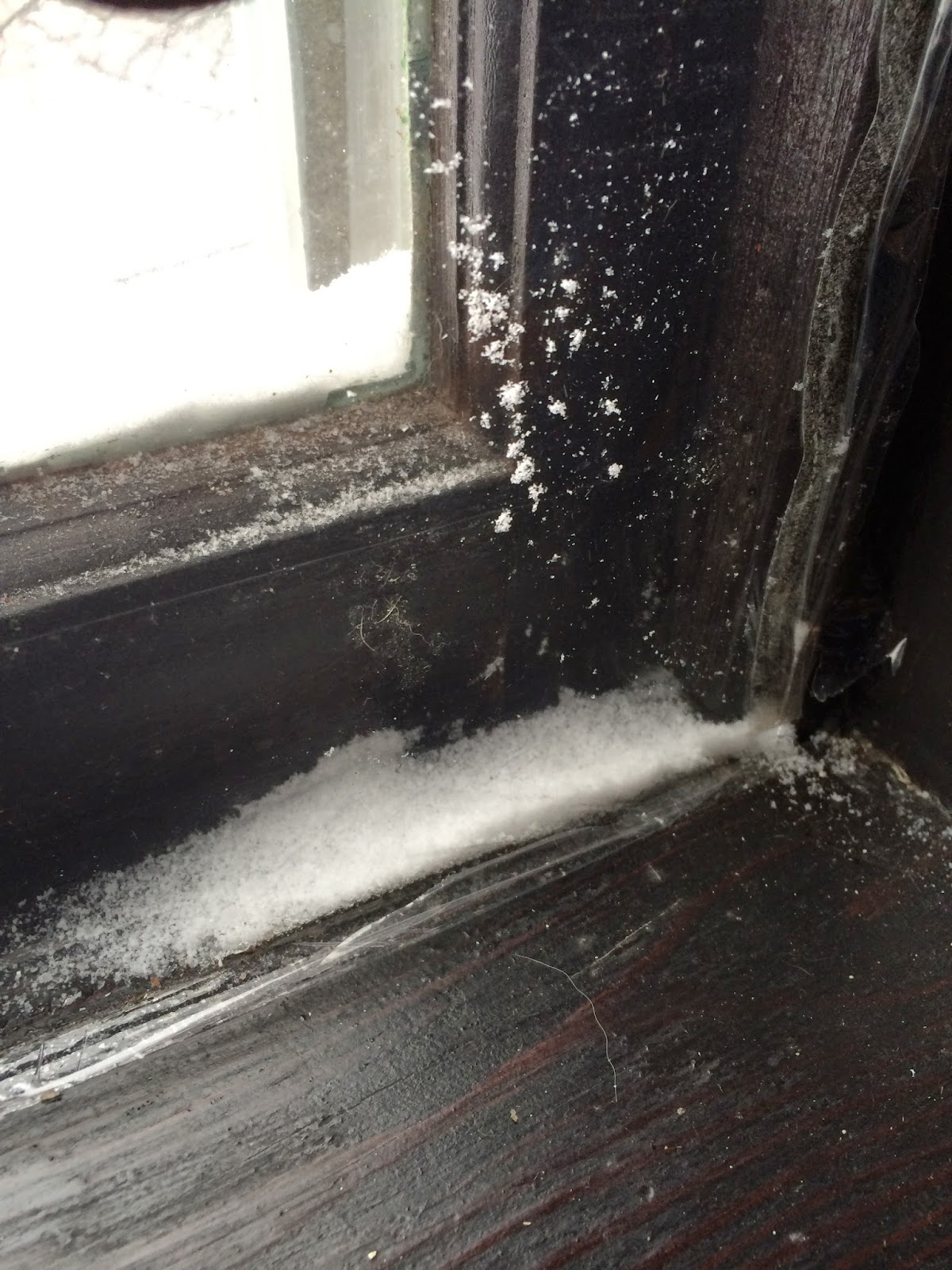 I sent my boss this photo with a funny caption. He showed it to his boss, one of our VP's at Hager. A few weeks later I was called into this same VP's office. He started the conversation by asking how work was going and then steered the conversation to my home life. How was it? I told him I really hated going home except for the dogs. He asked why and I told him the truth. That day began a search for a new place to live by his orders. He very clearly stated he nor the Hager family brought me from Florida to have this type of experience and whatever needed happen, time off work, get it done and get out of there! Wow. Just wow.  I was blown away by that support. I knew then I had made the right decision to take this job.

It took some hard looking, which wasn't easy in the middle of winter, but the end of February I moved into a house. It is in a great, well cared for, neighborhood while still being in the city. The house is one level with a basement and garage (no on street parking). A fenced yard for the dogs, a deck and separate patio area, the washer/dryer is on the living area and there is inside access to the basement. Which was helpful during two spring tornado sirens. It was warm during the last of the winter months, a consistent 68 degrees! Duncan stopped shivering and started gaining some of the weight back that he had lost. There is room to move around and have a full size couch. A true guest room and guest bathroom.

It seemed St. Louis was looking up!! Winter was over, flowers were blooming and the April rains came. I didn't realize my next challenge was just down the steps.