A Few of My Favorite Things

I don't know if it is the end of 2011 and beginning of 2012 or just a spurt but I have been doing a lot of de-cluttering.  Going through my drawers, cabinets and closets to make a conscience choice to keep or not an item.

There are a few items that I will never get rid of because of their sentimental value to me.  I thought I would share them with you . If you have some of those same cherished items in your house please share in the comment section below.


My mom's mother had two sister who I never knew well but loved their names:  Mazie and Nola.  In their later years they lived together and I would chat with them from time to time.  I don't know how it came about but at some point Aunt Nola offered to make me an afghan if I would pay for the materials.  I sent a check and several months later I received a beautiful afghan in the mail.  I don't have a lot of items that have been handed down generation after generation but I cherish this afghan and every winter it goes on the foot of my bed.


My mother-in-law was an amazing woman and I was so blessed to have had her in my life. She was a knitter and decided to make each of her daughter-in-law's a beautiful throw.  She finished my sister-in-law's and had started mine when she was diagnosed with lung cancer.  She worked on it on and off over the next year but died before she could finish it.  I didn't know much of this until the Christmas after she had died.  It was naturally a tough Christmas but when I opened that box and heard the story that her sister took the throw and completed it I just cried.  Anytime I am sick or sad I wrap this throw around me and feel both their hearts and arms around me. 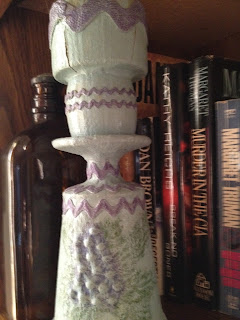 This crazy item is a candle holder.  My mom would make them for the church bazaar. She would save the tops of spray cans, baking soda cans & jars and turn them into candle holders.  I love it because she made it.

What is in your home?
Posted by Ginny Powell at 7:30 AM